The entrance to exhibition hall. This year, our suppliers have also exhibited products in the event, such as BAYKON, Keli, Zemic, Rinstrum.We talked to our partners from Europe. He said for this year the people visiting the event are not as much as the previous year, which was held in mid-April. But this year has changed in July Which is summer Most people go on trips because the students stop summer. It may be one reason that people come to this event not as much as they should. The BAYKON's booth , come with all new BX30 series. This year BAYKON came with full team for support customers. The LAMAX team also collects the atmosphere and share in photos. You can see the products or machines that you are interested in. We are happy to share information and provide advice on weighing systems.Or work solutions that would like to be used in the production process. This booth show the Checkweigher machine. One piece Weighing Platform, There are many kind of matetial such as metal, aluminum. For the next year, InterWEIGHING This will be held in Nanjing if you are interested in trying to track the website of this event. 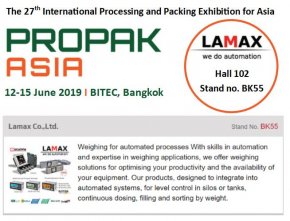 LAMAX had been the exhibitor in PROPAK ASIA 2019